GET STARTED | Get Your Fair Cash Offer Today >>

“I need cash for my house in Toronto.”

That’s what I heard from the owners of this lovely house in the Scarborough area of Toronto. The owners of this house were having big trouble with their tenant. To make matters worse, the house wasn’t in the best shape either. It was dated and roughed up. 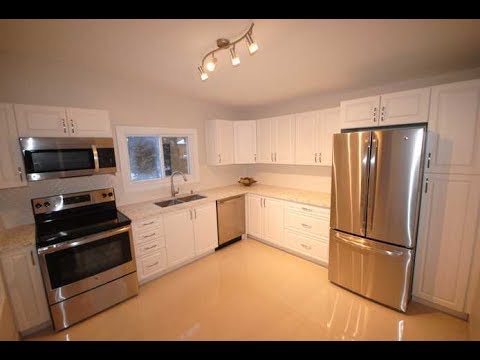 The sellers were on bad terms with the tenant and the tenant was not allowing them to enter the house. The tenant owed several months rent, wasn’t paying for utilities and had even assaulted the owner. (The alleged assault was a bump or a push and each side has a different story… no one was physically hurt… but no one likes to be pushed… or whatever may have happened.)

The sellers had been to the Landlord and Tenant Board twice in attempts to evict the tenant. But they couldn’t get the tenant out. I’m not going to take sides… I’m sure there were things both parties could have done better to resolve their problems. But you’re starting to see why the sellers just wanted out and wanted cash for their house. I’m quite sure the sellers were stressed out to the max and were losing sleep at night. No one would want to be in their position.

Like I said earlier, the tenant wasn’t allowing people in the house. So how do you sell a house if people aren’t allowed inside to view it? Well the house had 2 apartments and we bought the house with only seeing part of the house. The sellers wanted an experienced cash buyer and that’s why they called GTA House Buyers. When sellers ask for “cash for my house” that’s what they get and they can get their cash in under a week.

GTA House Buyers doesn’t need to go to a bank for a mortgage. Cheap money from a bank is great, but banks don’t lend on houses that need a lot of renovations and good luck trying to get a bank mortgage in under a week!

After we bought the house, we developed a much healthier relationship with the tenant. We treated the tenant with the respect that everyone deserves. We helped the tenant find a new house to rent, paid for movers, hired someone to help pack up the house and even contributed to their 1st and last month’s rent at their new home. Yes, we took good care of that tenant.

We bought the house, renovated it with building permits and converted it into a LEGAL 2-unit property. Now the house is rented out and the new tenants are enjoying the beautiful suites. We just finished renos and rented it out a couple months ago.

If you need “cash for my house”, then contact GTA House Buyers to work with a House Buyer who has the cash and can get cash in your pocket fast.

“working with GTA House buyers is all about a win/win arrangement.“

I wanted to write this review for GTA House Buyers. Aaron Moore, the owner has an awesome team! The two people I dealt with directly where Joadey Parcke and Michael Koprich.

I had two properties for sale in the greater GTA. I work in another province and I was finding it a challenge to sell in a market going in a downward trend. In addition, one property had a foundation issue and the other property was tenanted.

Real Estate Agents took too long to sell the properties and I needed them sold fast so I could focus on other priorities such as my family and career. I first came in contact with Joadey Parcke, she was very positive that the properties would be sold and gave me confidence to work with a cash buyer.

If you have never worked with a cash buyer, I like to think of a cash buyer – like the TV Show – Pawn Stars. You may have something worth 1,000,000 at auction (like Jimi Hendrix’s guitar) but you have to understand you have to sell it less than market for it to be a win/win for both yourself and a wholesale company such as GTA House buyers. Second, not all cash buyers are the same. GTA House buyers are the real deal, other companies may give you a 20-30 conditional period for them to find an investor to “buy” your property and if they can not you are stuck with your property – and most likely in this market – losing even more money. With GTA House buyers – I had a firm offer in 5 days!

The offer, was fair once you understand the market and understand working with GTA House buyers is all about a win/win arrangement.

Michael Koprich, was outstanding in terms of his professionalism and knowledge in finance! He guided me through the entire process from start to finish. I learned how GTA House buyers operated and made deals. The offer for my properties in terms of speed and cash was simply #1.

After the properties were sold, I have come to know Michael better and he truly is someone to have on your side. He not only went above and beyond for me and my family to sell the properties I learned this is his trait for his clients in general. I highly recommend that when you contact GTA House Buyers – To Ask for Michael Koprich for a fair cash price in today’s constantly changing real estate market and for someone who will go above and beyond for you as well!

Wouldn’t recommend anywhere else to go other than GTA House Buyers.

Michael was amazing and very helpful, going out of his way throughout the whole process to do everything he can and connect me to as many people as possible to make a deal happen. Thank you!

Hi,
My name is Elizabeth and I wanted to share my excellent selling experience with GTA House Buyers.
Aaron and JJ are genuinely great people who really are in the business of helping people with their real estate needs.
My family and I were completely stressed out because; initially we were in a contract with a different company, who said they needed 24 days to close our deal because we are a rural property.
We needed to close within the next 3 days because we bought another property out of province that was closing.
Aaron was able to close our deal with a very fair price within 48 hours, even when others said it would be impossible, and my family and I were able to make a smooth transition to our new place.
They even let us stay in the house a few days after closing and we were able to leave whatever furniture and household items in the house at no extra charge. This really helped us a lot in our out of province move.
I just cannot say enough good things about Aaron and JJ, they really are the real deal – it’s not a surprise that they are rated A+ under the Better Business Bureau.
They are super honest and caring, they deliver above the set expectations and you can really feel that personal touch that you only get with excellent customer service.
I highly recommend GTA House Buyers for your real estate needs.
If you really want a stress and hassle free selling experience along with a fair price and the closing of your choice, please save yourself the headaches, and disappointments, and sleepless nights from shopping around and comparing different “cash for houses” companies and just skip over to the right step of the process and give Aaron and JJ a call. You won’t regret it.

Get Your Fair Cash Offer: Start Below!